The Office for National Statistics (ONS) produces annual data on Business Demography. This source shows the number of business start-ups (‘births’) and business closures (‘deaths’) each year and gives an indication of the health and dynamism of the local economy. It also provides information on survival rates of business start-ups.

Since then, the number has dropped steadily and there has been an overall decrease of 4%. 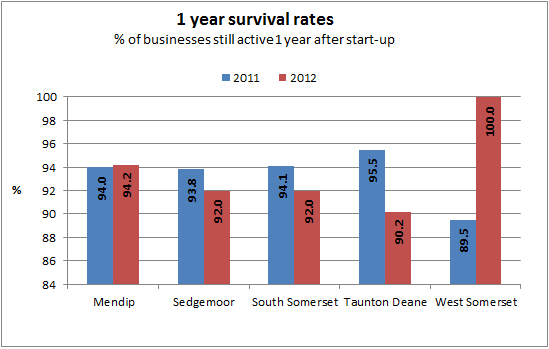 2010 was the worst year in recent times to start a business. Only 88.7% of Somerset businesses started that year were still trading in 2011.

Survival rates for businesses started in 2012 show mixed fortunes across the County. All businesses started in West Somerset in 2012 were still trading a year later; a sharp increase on the 89.5% rate the previous year. On the other hand, Taunton Deane saw a drop in 1 year survival from 95.5% to 90.2%.

In 2014 14.9% of Somerset households were estimated to be in fuel poverty. - Fuel poverty