Key messages from the 2011 Census:

Data from the last census (in 2011) identifies a total of 25,214 people living in England and Wales who have a second address in Somerset. Around a quarter of these are Somerset residents themselves.

The remaining three-quarters of people are most commonly from the South West region, notably the urban areas of Plymouth (935 people) and Bristol (888 people). Outside the South West, the most common places of usual residence are London (2,700 people), Cardiff (599), Birmingham (415), Southampton (338) and Oxford (287).

Figure 1: Distribution of people with a second address in Somerset, by local authority, 2011 Census 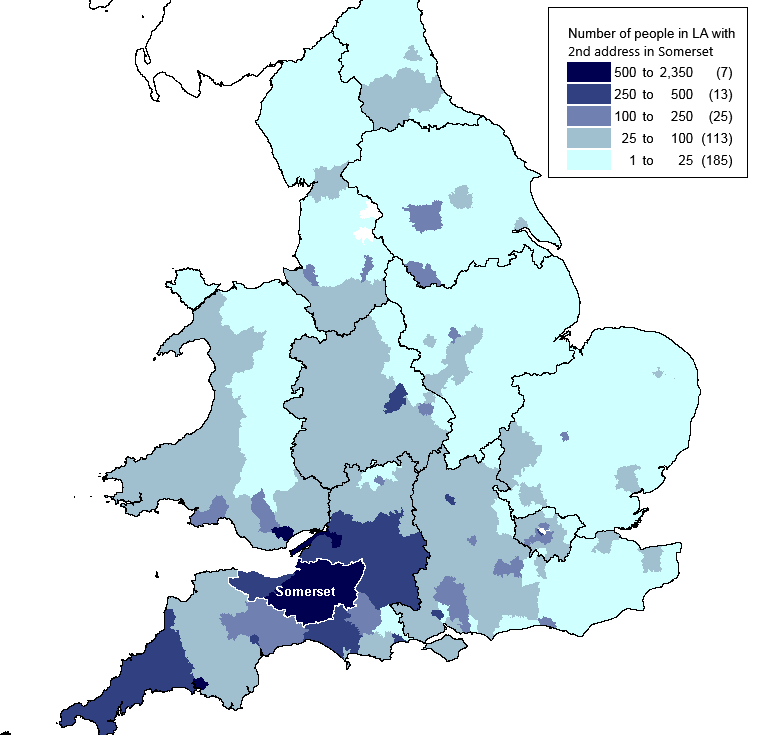 A second address is defined as one in which a person stays for more than 30 days per year. The great majority (9 out of 10) of people with a second address in Somerset are of working age (or children).

Typical second addresses include armed forces bases, addresses used by people working away from home, a student's home address, the address of another parent or guardian, or a holiday home. The Census results narrow these down to three classifications, ‘Working’, ‘Holiday’ or ‘Other’. For Somerset:

All Somerset districts have a higher proportion of second addresses than the England and Wales average, mirroring a trend across rural areas nationally. The relatively high number of ‘holiday’ addresses in West Somerset puts the district at double the national average (a rate of 76 people per 1,000 usual residents). 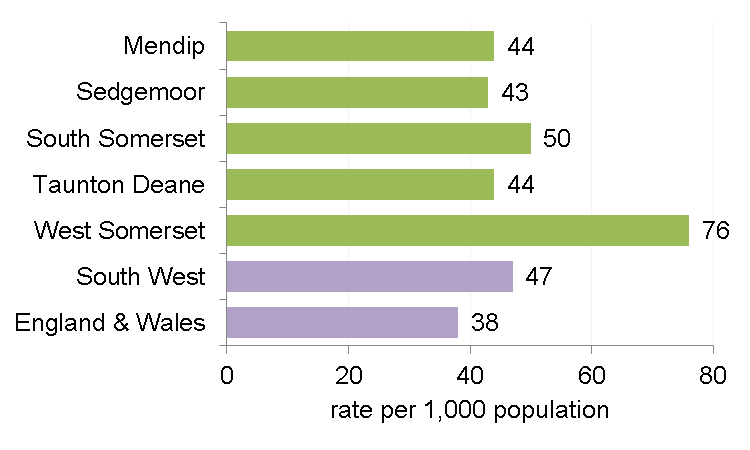 Moreover, West Somerset has the 8th highest rate of second addresses used for the purposes of holidays of any local authority in England (a rate of 33 per 1,000 usual residents). 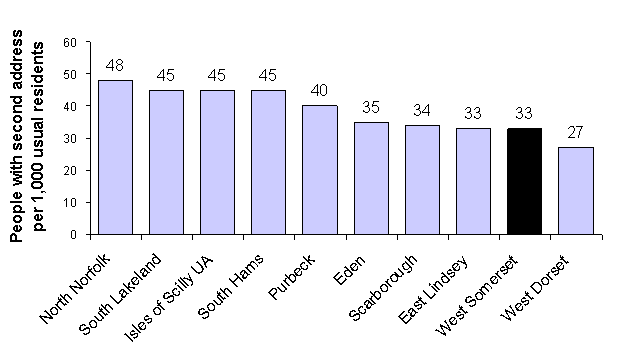 Second home ownership brings money into the local economy but can also result in increasing local house prices due to competition with buyers of second homes. Housing affordability is a particular issue for residents of West Somerset. Second homes can also impact on community cohesion when houses stay empty for long periods.

The full Second Address dataset from the 2011 Census is available through the Office for National Statistics website.

70.5% of working age people in Somerset are qualified to at least Level 2 on the National Qualifications Framework (equivalent to 5 GCSEs at grades A* to C), higher than the national average of 67.3%.